How the Industry Is Reinventing Cold Aisle Containment Practices 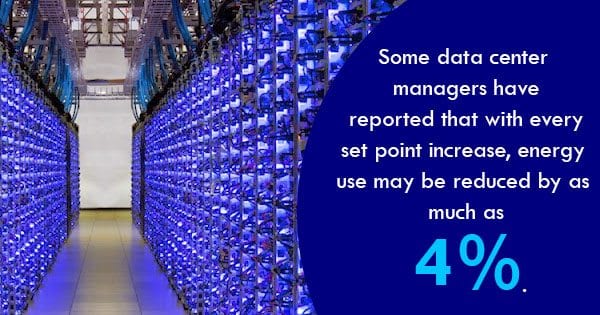 When it comes to data centers, energy efficiency is one of the biggest concerns. Nearly 80% of data centers already use, or are looking to use, hot or cold aisle containment to regulate temperatures. The benefits of cold aisle containment systems are largely impactful in reducing the amount or energy needed for cooling the individual devices in each server rack enclosure.

Instead of wasting energy cooling the entire data room, cold aisle containment solutions are much more effective since the chilled air is harnessed inside them and then excess heat is dispelled and wasted away.

In these containers, however, wouldn’t it take a huge amount of energy to cool down these systems? Well, not necessarily.

See, it’s important to know that these cold aisle containment solutions really aren’t cold at all. Traditional data centers keep their cold aisle temperatures between 68 and 72 degrees, which is generally pretty comfortable. And now, bigger companies like HP and Facebook are keeping some of their cold aisles around 85 or 90 degrees consistently.

Raising the set point, or the baseline temperature of the data center, to about 80 degrees can help reduce energy costs typically spent on air conditioning. The higher the temperature is raised, the less amount of time a system may need to recover in case of a cooling failure, which happens more often than you may expect.

Some data center managers have reported that with every set point increase, energy use may be reduced by as much as 4%.

For Facebook, the results may be even more dramatic. In fact, the social media giant has already seen some promising results. In 2011, they took the plunge and raised temperatures in their Prineville, Oregon facility and prepared to raise the temperature in their Forest City, North Carolina data center as well.

“Our teams have learned a number of things over the past few months of operation, which have led to changes in our second phase of Prineville as well as our new data center in Forest City, North Carolina,” Yael Maguire wrote on Facebook’s blog.

“Comparing our first phase of Prineville with how we plan to operate Forest City, we’ve raised the inlet temperature for each server from 80°F to 85°, 65% relative humidity to 90%, and a 25°F Delta T to 35°. This will further reduce our environmental impact and allow us to have 45% less air handling hardware than we have in Prineville.”